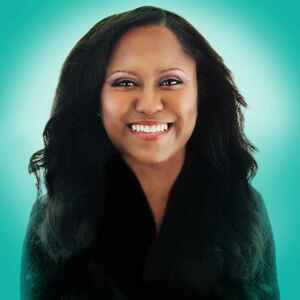 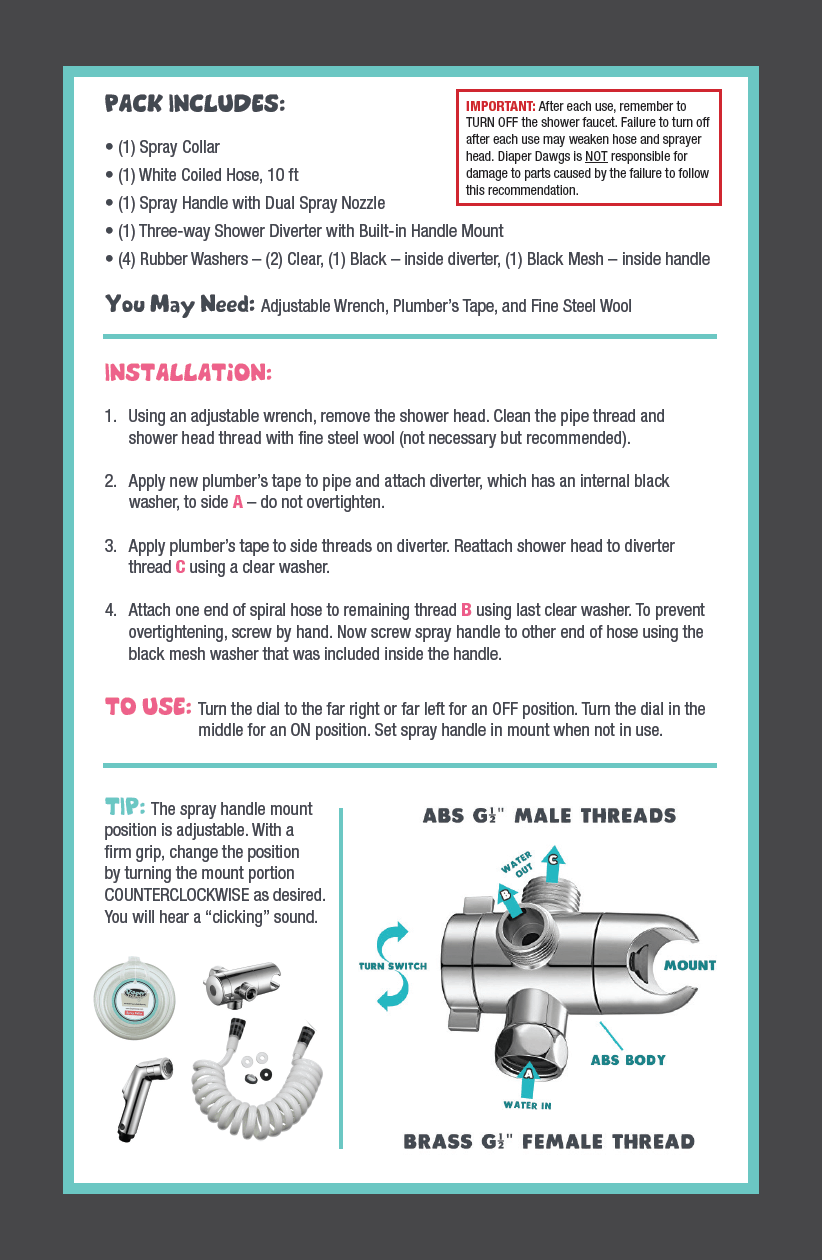 Our Diaper Sprayer has a limited 2-year warranty through our partner. If you are within that time or need any other type of service regarding the Diaper Sprayer, please contact us at support@diaperdawgs.com.

How does this compare to the shower version?

We designed our shower sprayer for smaller bathrooms and smaller budgets.

Since our toilet sprayer is exposed to your floor, the hardware is made of solid brass. The hose is also metal with a patented woven core…all to safeguard your bathroom against possible leaks. Our shower sprayer hardware has BRASS CONNECTORS only.

The body is mostly made of ABS plastic in a chrome finish. The hose is also plastic because we wanted the coiling feature for a super neat appearance as compared to an unruly straight hose.

This primarily plastic construction makes the unit much lighter and easier on hands. Since the unit is housed completely in your shower, it’s leak-damage proof!

Should any leaking occur, the water will simply go down your shower drain. We also back our sprayers with a 2-year limited warranty against manufacturer defects for peace of mind!

Isn't this the same as a showerhead?

Only in that water comes out of it!

Shower heads are not only bulkier and heavier to maneuver while your other hand is on the dirty diaper itself, but they also don’t have an ON/OFF trigger.

So while you’re wrangling a clumsy shower head, you’ll need a THIRD hand to turn the water off at the shower faucet.

Our nozzle also has an option for a jet stream, which might be a bit more difficult to get on a showerhead.

How does this compare to other hot water diaper sprayers?

We have all the features of the other hot water diaper sprayers plus more! Our shower sprayer fits standard American 1/2 inch shower plumbing pipes NOT sink faucets– that means you don’t need to play a guessing game with keys or adapters.

Our hose also stretches to 10 feet, but don’t worry about a messy, bulky pile on the floor or under your cabinet since it coils up for a super neat appearance. Our unit hides completely in the shower away from little hands, and our diverter has a built-in holder for the spray wand.

Buy an extra diverter and install it at your in-laws or RV if you want easy travel compatibility. We also set ourselves apart with our signature dual-mode nozzle that gives you both a wide and jet stream of water.

And of course, are sprayers come with spray shields included, right in the package and at a comparable price to standalone sprayers!

Why have two types of diaper sprayers?

Our goal is to accommodate everyone from big to small bathrooms from small to bigger budgets. The limitation to our shower sprayer is that the hose only stretches up to 10 feet.

If you have a distance of more than 10 feet from the shower to the toilet, then our toilet sprayer will suit you best.

Also if your toilet is in a separate room, then the shower sprayer might not be the best fit. Lastly, some might prefer the convenience of a sprayer right next to the toilet as opposed to having to reach inside a bathtub. Either way, we’ve got you covered!

Does this model have a backflow preventor?

This model does not have a backflow preventor; however, backflow is very, very unlikely. It’s like getting flood insurance when you live in Arizona...only useful during the apocalypse.

There would have to be a lot of factors happening at the same time for any backflow to be possible…such as the hose being completely submerged in water. Lusan Bidets explains this perfectly below:

Backflow is what can occur if there was a loss of water supply to your house (perhaps caused by a burst water main) and for example; a hose was left in a swimming pool while filling it.

If the tap being used was not fitted with a vacuum breaker device, this could result in swimming pool water is sucked back up the hose into the main supply line: causing contamination of the public water supply (with swimming pool water).

With Handheld Bidets a similar scenario is possible: If someone had a blocked toilet (fecal matter in the bowl) and decided to use the hose of a Handheld Bidet (with the head unscrewed) to try to clear the blockage.

The handheld bidet also did not have a non-return check valve, or if it did – the check valve failed. The only difference is that this time instead of chlorinated swimming pool water, we now have the possibility of introducing dangerous pathogens into the public water supply, which, if ingested in sufficient quantities have the potential to cause serious illness or even death.

Of course, 6 individual factors must be present (and all at the same time), for it to be possible that a dangerous backflow incident with a Handheld Bidet could occur:

The statistical probability of all six factors being present at the same time is obviously pretty small. Nevertheless, because it is technically possible for backflow to occur, combined with the fact that fecal pathogens have the ability to cause death if ingested in sufficient quantities, means that Handheld Bidets have been placed in the “High Hazard” category for risk of backflow by Australian Standards.

Some people mistakenly believe that the problem here is posed by possible fecal contamination of the bidet nozzle itself. Not so: if you think about it carefully; this would then apply equally to traditional bidets (Bidettes) which have an outlet above the rim of the pan.

It is just as conceivable that the outlet on these bidets could become contaminated with fecal matter or bacteria caused by splash back, as the nozzle of a hand held bidet. By the way – for those who don’t know – handheld bidets are meant to be operated at all times from above the toilet seat (never from underneath) and when used like this are no more prone to splash-back than a traditional bidet.

But what do the Standards say about traditional bidets? Quote: “where the douche outlet is, in all positions, at least 25mm above the rim of the pan, NO backflow prevention is required”.

The issue here is about backflow of contaminated liquid, not bacteria migration! For it to be possible that backflow of contaminated liquid occurs, the outlet of the bidet must first be submerged in a liquid. If the outlet of the hand-held bidet (in the lowest position possible) could never be lower than 25mm above the rim of the toilet pan, no backflow prevention would be required.

This would, of course, make a handheld bidet very difficult to use, and so therein lies the problem. This by the way; applies equally to flexible shower outlets that could be left lying in a bathtub full of water, or (heaven forbid) even in a toilet bowl. The following note from the Standards indicates (to some extent) how they are formulated to be as “idiot-proof” as possible.

So although Hand held bidets are included in the “High Hazard” category; there is actually nil risk of dangerous backflow occurring unless the hand-held bidet was accidentally/intentionally placed below the water level in the toilet bowl itself – and why would any intelligent person do that?

Did this answer your question?